One thing you will notice in Europe is the extensive use and creation of public space. Not only is it available and there, people use every inch of it. Especially Italians. Italians are watchers and performers. Any given time of day in any place there will be a man standing in a doorway (who knows where it leads), smoking a cigarette, watching you as you watch him watch. Any given time of day, there is a young couple passionately kissing on the lawn of a public park. Any given time of day, people are seated high, low, mid-level, on the marble steps, on the wooden bench, on the fountain-side, chasing the shade of a small monument. The people and the activity give Rome’s streets purpose. They inspired intentless drifts and a sense of security.

This is in stark contrast to what we are used to in Vancouver: where a journey is from place to place, always somewhere to go and be, running from the rain. Dwelling in spaces occurs only on the beach in nice weather, and even then, we just stare at the mountains. We avoid the unsightly haunts in seek of a version of California.

Probably one of the biggest pieces of advice I got before this trip from my more well-travelled friends was to remember to take time to do absolutely nothing, sit, and watch. I sought out these moments in all the inbetween spaces each and every day, and I think they were the only way we could stop and stay sane. They were also the “situations” that I sought in our daily strolls, an attempt to drift within a framework.

Today, we met at Piazza Navona, and we ended up back at Piazza Navona at night. It is home to three of Rome’s most famous fountains and borders it’s most beautiful Baroque Borromini Church. It is also one of the best used public spaces I have ever witnessed. Situated just off of Via Vittorio Emauele, nestled between a slew of restaurants, the Piazza changes like a season.

In the morning, we saw artists sketching the Fountain of Four Rivers with intense focus, along with other artists setting up their sales stands for the day. As the day goes on, the live sketchers leave, and street performers and tourists move in. The cafes open. The restaurants turn over wine glasses. Ciao, bella.

The afternoon sun arrives overhead and people chase shadows as it moves around the obelisk, in search of the shade. They buy gelato and linger alongside the fountains, wondering whether they should put their feet in, knowing (or not) that it is illegal, not caring how uncomfortable the steel rail underneath them really is. Lovers fight, children play.

As evening rolls around, spectators and guests alike gather to participate in the best of Italian affairs: dinner. As the sun sets and the street lights come on, the fountains are surrounded by an aura of romance and illusion. The wide open eyes of the men representing the Nile, Tiber, Danube, and Platte grow eerie and ominous. The restaurants are open as late as the bars, and the visitors linger over the square that has remained the same through centuries, only a passerby. The Piazza never sleeps, it sits silently still as the stop motion of the days and centuries pass by.

Between the 16-19th centuries, drains were plugged and Piazza Navona was flooded. Once a year, huge amounts of water up to 3 feet deep would fill the Piazza in a strange event in which the rich, with their carriages, would fly across lolling in fun, while the bystanding poor would watch or wade. There was a picture of this event on our apartment wall in Florence. All things lead to Rome, not just roads.

The other astonishing public commodity in Rome, apart from the various Piazzas and Piazettas, was drinkable water. In every neighbourhood, near an open space anticipated by the widening of your view through a street during a walk, stood constantly flowing public fountains. They took on the shape of lion’s heads, spouts sticking out of walls, fish, and embellished faucets. It seems that Romans long ago figured out how to eliminate a need for Dasani along with their distaste for Starbucks. Every time we were thirsty, all we had to do was wander for five minutes until a fountain was found. Later, in Florence, I drank straight from a fountain that looked like ten babies’ heads spouting water out of their mouths, and I felt like I was kissing an old stone baby on the lips. American tourists passing by didn’t understand. 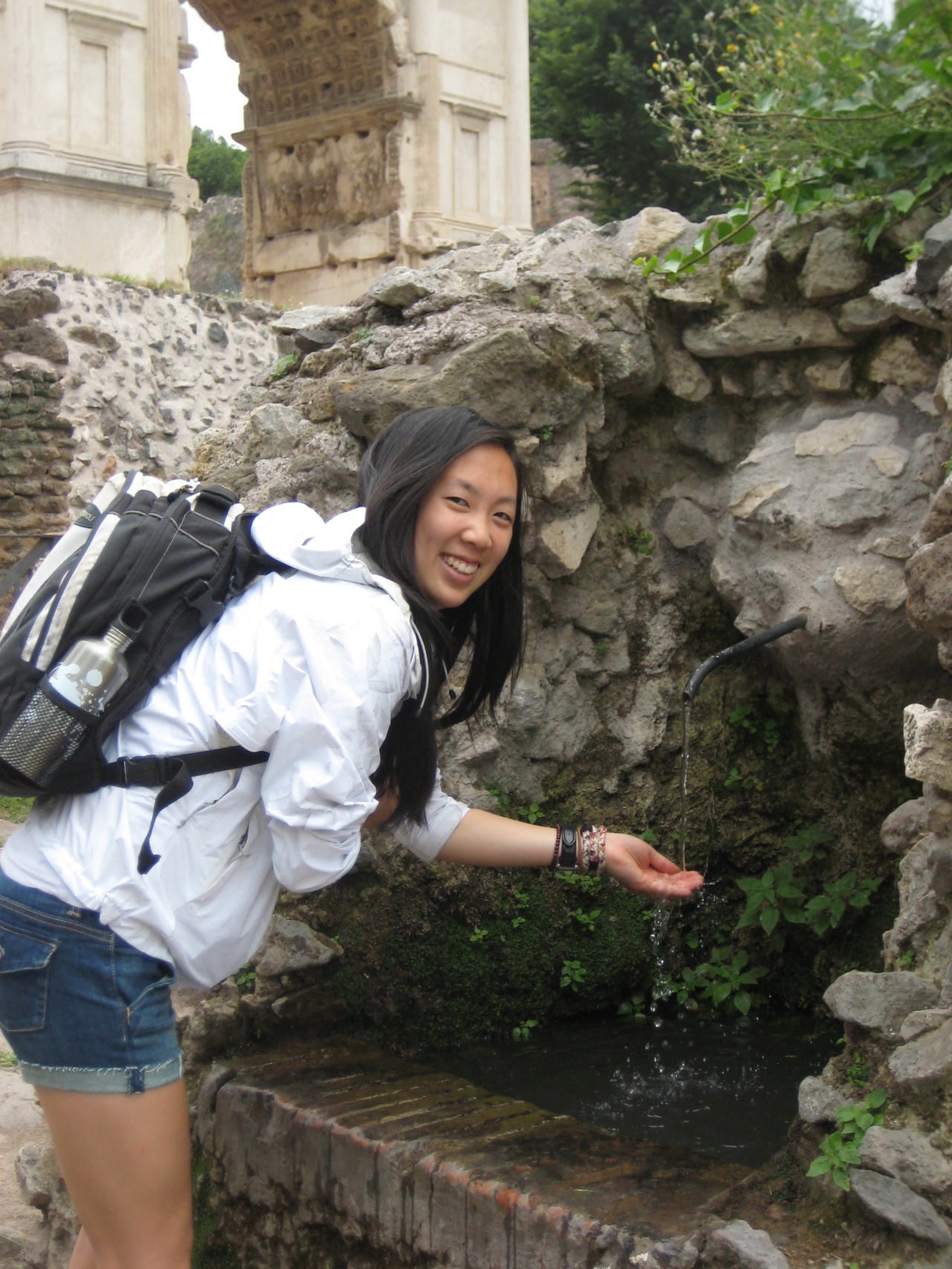 Icy cold, clean, from a fountain in the rocks of the Roman Forum.

In Europe, where things like dual flush toilets and automatic sensor lights are not touted as “green technology”, but more “common sense”, this evident “wasting” of water could be surprising. But like so many other things that made sense in Europe, you have to look at the source and longevity of these water sources. Many of the aqueducts carrying the water leading to these fountains have been fed for a few hundred to thousand years. The water keeps coming, free, as potable as ever. I like to think that the reason the water in Rome was so hard with minerals and made our hair feel dry and left residue in pots and pans is because it is enriched with a thousand years of pipe buildup.. Kind of like how the beer at the Calgary Saddledome is unlike any other in the world because the pipes to the kegs have never been cleaned.

In Vancouver we have an abundance of water from the sky, yet we have no public fountains. We have an abundance of beautiful outdoor spaces, but no density and desire to fill them with people. We need a new kind of architecture; a new kind of space, with this socialized European sensibility capable of breeding public tolerance and stronger communities. Covered public space that is unafraid of flooding: if they flood the streets on purpose in Rome for leisure, in Japan to cool the streets, what bad can it be to embrace the tides, the rainfall, the puddles? Mathew Soules’ Rain Architecture. Can we look towards an urban fabric that is not subservient to views of the natural landscape, but embraces it and it’s cycles, it’s systems?